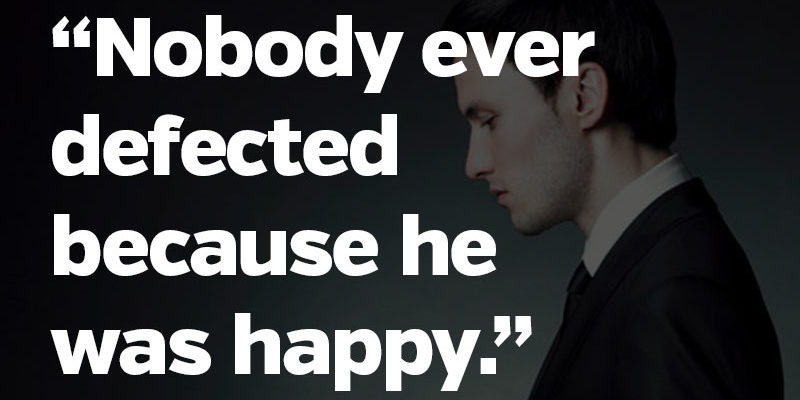 The first part of this discussion [1] concluded with the fairly controversial statement that decades of counterintelligence (CI) focus on what have traditionally been considered the key motives for insider espionage, summarized in the acronym MICE (Money, Ideology, Compromise/Coercion, and Ego, further amended with the inclusion of disgruntlement/revenge, ingratiation, and thrills/self-importance) [2] has yielded valuable information but essentially missed the target.

This effort has centered on analyzing the objective, observable behaviors that manifest from motivation toward espionage rather than the subjective, internal and intangible motivation itself.  To use a medical analogy, much effort has been placed in analyzing and treating the symptoms without adequately addressing the disease.

The article argues that Dr. David Charney’s concept of the core psychology of the insider spy— an intolerable sense of personal failure, as privately defined by that person [3]—presents a more useful approach toward understanding why insiders commit espionage.  Charney shifts attention away from exogenous constructs like greed or political ideology and focuses on the primary, endogenous motivation of ego preservation.

In this view, the traditional MICE categories are less motives in and of themselves but, rather, the vehicles through which the insider spy manifests his actual motivation—the first cause—which is to overcome his intolerable sense of personal failure and regain a positive self-concept. [4]

At this point it bears repeating that insider espionage is actually extremely rare (at least in matters of national security; corporate espionage is a separate but related issue).  From 1947 to 2007 there were only 173 confirmed cases, [5] representing an astronomically small fraction of US persons who hold security clearances (currently estimated at about 5.1 million) [6] or who have held them in the past.

However, as in the case of terrorism, even a single insider spy successfully avoiding detection is capable of causing tremendous damage to national security, especially in the cyber era.  The damage is not merely to government organizations, but to the security of private institutions and the safety and well-being of individual citizens.

It is necessary to acknowledge the reality that one insider spy is potentially capable of causing a disproportionately large amount of damage because the goal of preventing or mitigating that damage is daunting.  Any serious, comprehensive effort to counter insider espionage is unavoidably complex, involves a number of distinct (and sometimes antagonistic) disciplines or cultures, and requires the on-going commitment of considerable material and intellectual resources.

Adopting Dr. Charney’s concept of the core psychology of the insider spy can contribute significantly to this effort, but it wouldn’t make the CI job easier, it would actually make it still harder by demanding attention be paid to the murky, often illogical, always subjective world of the individual psyche.  The reward is worth the effort, however, given the damage even a single insider spy may accomplish.

What are the practical consequences of employing core psychology in the effort to thwart insider espionage?

For one, it would require institutions to rethink their traditional understanding of the motivation for insider espionage.  In this light, it would no longer be acceptable to simply say the insider spy committed espionage because he was greedy, or because of his ideology (religious, political, or whatever), or because he sought revenge against his organization, or because he was somehow naturally inclined toward deception.  It wouldn’t be enough to say he did it because he was quite simply a “bad guy” at some fundamental level who nevertheless inexplicably got around the security measures employed to keep someone like him out.

Core psychology avoids the Manichean view that there are essentially “good” people who are not susceptible to the temptations of MICE and “bad” people who, given the opportunity, will succumb to one or more of the traditional motivations for espionage.

It forces the organization to abandon this simplistic yet comforting view of motivation and embrace the reality that motivation is complex, impacted by any number of internal and external factors, and arises in the inaccessible world of the individual psyche.

It requires an acceptance of the fact that under certain circumstances an individual who has confidently been placed in the “good” column may inexplicably migrate over to the “bad” column.

Another consequence is abandoning the belief that anyone can ever be reliably “cleared.”  Rather than an absolute that is granted after a prolonged period of painstaking investigation or earned over a period of spotless service, trustworthiness becomes a condition that is subject to change under specific circumstances.  Like physical or mental health, trustworthiness becomes something that must be constantly maintained through the active efforts of both the individual and the institution.

In the view of core psychology, a trustworthy employee may perform in an acceptable or even exemplary manner until external circumstances arise that press him to the internal perception of having failed.  He further determines that the failure is psychologically intolerable and must be relieved so that he might regain a positive sense of self.  For a very small number of people who hold security clearances, that positive self-concept is regained through espionage and manifested in any one or a more of the traditional or expanded MICE justifications.

This approach would make the CI or security professional’s job easier in one sense, but more difficult in another.  Instead of looking for signs of avarice, disgruntlement, hostile ideologies, or inflated ego (which the CI professional is likely to find in abundance even among the vast majority of cleared persons who never commit espionage) the CI professional should instead focus on the concept of self-perceived failure and whether a particular individual is likely to consider his or her failure as intolerable.  On the other hand, unlike arriving at work in a brand new Jaguar convertible, the insider spy’s sense of intolerable failure and the means by which he has chosen to relieve it may not announce itself in such an outwardly visible manner.

This approach also provides the CI professional with the opportunity to use psychology in a proactive way that goes beyond simply screening applicants for undesirable personality traits.  If insider espionage is likened to disease, then the internal sense of intolerable failure is analogous to the virus that breaks down resistance while remaining invisible to the outside world.  The future insider spy’s intolerable sense of personal failure breaks down his ability to think objectively and rationally (experiencing what Dr. Charney calls a psychological perfect storm).  It undermines the internal and external psychological defenses against that behavior.

What are those defenses?  CIA research psychologist Terrence Thompson identifies them as loyalty, hardiness and resilience (in the face of “life’s unfortunate circumstances”), and character (the ability to “just say no”).[7]

“Most personnel with access to classified information have the opportunity to betray, and many have a financial or other personal motive to do so. Betrayal is so rare only because it is deterred by basic moral values; loyalty to country, employer, or co-workers; and/or fear of being caught. Moral values, loyalty, and fear are the bedrock on which security is built. The stigma commonly associated with betraying one’s country also plays a role. Any social changes that erode these inhibitions to betrayal are likely to increase its frequency.” [8]

To continue the medical analogy, if an intolerable sense of personal failure is the virus that causes the disease, then taking active measures to reinforce the defenses suggested by Thompson, Heuer and others might serve as an inoculation against that virus.  Everyone, including those with clearances, experiences failure at one time or another.  What drives the very few who become insider spies toward espionage is that what they perceive as failure is also perceived as intolerable.

This is the linchpin.

The failure itself, whether real or imagined, self-inflicted or the result of the actions of others, is not sufficient to drive the insider spy toward espionage.  What is necessary is that the failure be perceived as intolerable.

This would suggest that the best intervention is to proactively attempt to strengthen those defenses in order to either make the perceived failure more tolerable or, alternatively, make the idea that committing espionage to relieve that sense of failure even more intolerable to the would-be spy (that is, to make espionage seem worse than failure or yet another form of failure).

CIA psychiatrist Wilhelm Marbes writes in regard to defectors,

“Nobody ever defected because he was happy.” [9]

The same can be said about insider spies.

It is perhaps a truism to say that a cleared individual who is at least satisfied with his or her circumstances (personally, professionally, politically, psychologically) has no incentive to commit espionage.

This is not to suggest that insider espionage can be eliminated by instituting Casual Friday, Funny Hat Day, or any other gimmick.  Workplace satisfaction is more likely to be achieved by providing an employee with challenging work that is appropriately compensated and the opportunity to serve as a valued member of an effective team.  Research suggests the most satisfied workers are those who feel their work is part of a “higher calling.” [10]

It is beyond the scope of this article to suggest the many ways in which the would-be insider spy might be persuaded that his perceived sense of failure is not intolerable.  There is, however, an ever-increasing body of research that would be helpful in addressing this problem.  Like any issue dealing with the intangible world of an individual human psyche, the solution is not simple and universally applicable.  Moreover, a single approach such as core psychology is not sufficient in and of itself to deal with all instances of insider espionage.

However, if the first cause of insider espionage is, as Dr. Charney suggests, an intolerable sense of personal failure, as privately defined by that person, if this is the spark that lights the fire that consumes the insider spy, his family and friends, his organization, his country and perhaps others, then it is well worth the effort to identify and make every attempt to prevent that spark from bringing on a devastating conflagration.

One example should suffice: former US Navy Chief Warrant Officer John Anthony Walker provided the Soviet Union with information on US Navy nuclear capabilities that might have convinced the Soviets that a successful first strike was possible and a nuclear war winnable.  The loss of life in a nuclear war between the two Cold War adversaries is unimaginable.  While the number of individual decisions by individual actors leading to such a cataclysm would have been immense, it would all have ultimately originated from a single thought in the mind of a single individual; John Anthony Walker decided to spy.

A healthy work environment is also necessary to undermine the internal dialog that leads certain individuals toward espionage, as is the broadly-held and accepted public perception (hopefully internalized by the would-be insider spy) that to commit espionage against one’s colleagues and country is quite simply morally unacceptable.

A 2014 article in SC Magazine UK suggested that “the much-publicised insider threat—where a company employee leaks data intentionally or unconsciously—could be countered by building employee loyalty and hiring behavioural psychologists.” [13]  That would be a start, but the issue is much larger than any one culture or field of expertise.

Still, developing measures based on the true psychology of the insider spy, to include Dr. Charney’s concept of core psychology and the creation of a National Office for Intelligence Reconciliation, would balance and enhance current efforts that tend to focus on law enforcement or technological security measures.

As the stories of John Walker and other insider spies demonstrate, terrible suffering and devastation can potentially result from the spark of a single thought.  As complex as a multi-disciplined effort might be, as seemingly unfathomable as the individual mind appears, it’s worth the effort.