New documentary shows the psychology behind recruiting a spy 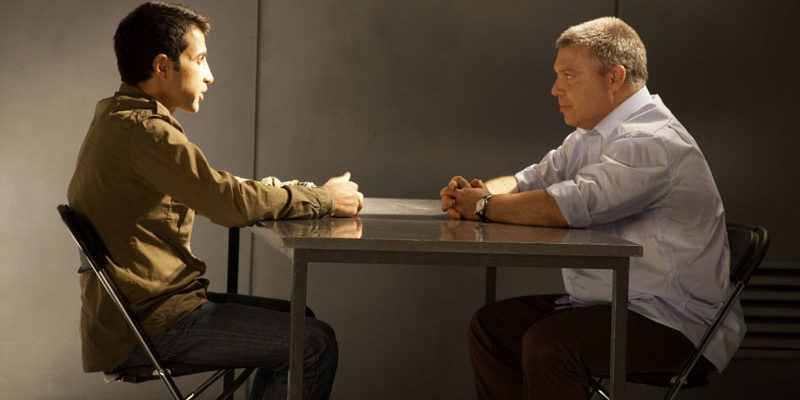 (Newsweek/Jeff Stein) . . . Based on a best-selling memoir by Mosab Hassan Yousef, the son of a founder of Hamas, The Green Prince is an engrossing documentary on how Israel’s counterintelligence agency, Shin Bet, managed to turn him into a spy against his fellow Palestinians—and his own father.

It opens with a re-enactment of the young Yousef in an interrogation room, hooded and shackled after his arrest on a weapons smuggling charge, facing veteran Shin Bet operative Gonen Ben Yitzhak. The two enemies form a strange and enduring bond, which makes the film an odd kind of noir buddy flick.

Yousef, of course, grew up with a hatred of Israel in his DNA, but in the skilled hands of his interrogator, he slowly comes to accept that the methods of Hamas—its cynical exposure of its own people during its impotent rocket offensives, its indiscriminate killing of Israeli civilians, the murder of suspect comrades—conflict with its lofty creeds and, more critical, his idealism. He agrees to become Ben Yitzhak’s spy, even goes back to prison so he can rat out jailed Hamas leaders.

“Recruiting is an art, a very difficult art,” Ben Yitzhak says early in the film, which has won acclaim from critics and film festivals. “The main issue is understanding who is the person who is sitting in front of you. You have to understand his point of view, you have to understand his background, who is his family, what happened to him. You try to find [his] needs. And then when you know that, you know how to play with him.”

Most important, Ben Yitzhak adds, “when you handle a source, you make him do things that he would never do, to your benefit…. And you do it by finding his weaker points and use them.”

Ben Yitzhak discovered that Yousef carried a deep sense of shame and betrayal from being raped as a youngster by Palestinian elders. What else was he ashamed of? Hamas suicide bombings. What else? The self-dealing and casual brutality of Hamas bigwigs. Yousef’s journey from shame to betrayal, skillfully guided by Ben Yitzhak, was not long.

“You can be pretty sure it’s a doctored version of what happened,” says Milton Bearden, a former CIA station chief in Beirut and Pakistan who, for a while during the Cold War, was also in charge of our spies in the Soviet Union. “Most of these people recruit themselves.… It’s sometimes to our advantage to make it look like we heroically recruited a spy,” he added, but it rarely happens. The CIA and FBI recruited a lot of Soviets, but “the volunteer had already made up his mind.”. . .

. . . “The very first thing you have to do is have storefronts for the guy who decides, I hate this and want out,” Bearden said, “so they know where to find you.”

What drives them in? “Greed, revenge, even boredom,” he says. And what does the CIA have to offer? “The three B’s,” he says. “One, they can believe in something; two, they can belong to something; and three, they get to break the other guy’s stuff. It appeals to a whole class of males,” he said. “It’s the same reason guys join the Marines.” . . . (read all)